Objective: During 2003 we have investigated resistance to carbapenems in Enterobacteriaceae from fecal carriers and other clinical samples.
Methods: All stool samples sent for bacterial culture were inoculated on MacConkey agar supplemented with 2 mg / L imipenem (IMAC). These IMAC plates were incubated overnight. Strains of Enterobacteriaceae suspected of being MBL carriers were identified using the API 20E system (bioMérieux, Marcy l'Etoile, France). In vitro susceptibility tests were determined by the standard disk diffusion method and confirmed by E-test. To detect MBL production, a synergy test using disks or a test strip E containing imipenem plus EDTA was employed. Detection of the blaVIM-1 gene and class 1 integrons was performed by PCR amplification. The nucleotide sequences of the PCR products were determined with a Beckmann 8000 sequencer. The conjugation and transformation experiments were carried out using the filter pairing method and following the recommendations of Bio-Rad (Bio-Rad, Laboratories) respectively.

Results: From 1043 stools studied and 4345 susceptibility tests determined in clinical samples during 2003, two strains were obtained, Klebsiella penumoniae from stools and Escherichia coli from urine samples, suspected of being carriers of MBL. These strains were obtained from two patients. In vitro susceptibility tests showed that both strains were resistant to all b-lactams but sensitive to aztreonam. Although imipenem was sensitive, its diameter was small (22 mm). The MIC for imipenem was 4 to 6 mg / L and 0.75 mg / L for K. pneumoniae and E. coli, respectively. The disk synergy test was positive. PCR amplification of blaVIM-1 was positive and direct sequencing of this amplification product showed 100% homology to the blaVIM-1 gene in both strains. Class 1 integron PCR produced a 4 kb amplification product of K. pneumoniae and E. coli. Conjugal transfer of resistance was handled with K. pneumoniae and E. coli, but in E. coli a previous transformation was necessary.

Conclusion: The prevalence of carbapenemases in strains of Enterobacteriaceae is low. To our knowledge, these isolates of K. pneumoniae and E. coli are the first species of Enterobacteriaceae producing VIM-1 in Spain. MBL production should be studied when the strain shows a profile of resistance to cefotaxime, ceftazidime and cefepime but sensitive to aztreonam and imipenem.
P409: Metallo-beta-lactamase in clinical isolate of Pseudomonas aeruginosa in a Portuguese hospital and identification of a new enzyme similar to VIM-2
M.J. Carvalho, M.J. Saavedra, A. Correia, A.P. Castro, A. Duarte (Aveiro, Vila Real, Lisbon, P) 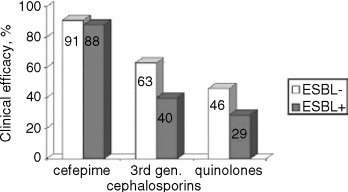 Objectives: Metallo-beta-lactamases are responsible for carbapenem-resistant Pseudomonas aeruginosa. The spread of genes encoding these enzymes between gram-negative bacteria has been described in different countries, as well as in different species, and constitutes a threat to public health. The objective of this work was to identify metallo-beta-lactamases in clinical isolates of Pseudomonas aeruginosa.
Methods: A total of 27 clinical isolates of Pseudomonas aeruginosa collected from February to October 2004 at a hospital in northern Portugal were found to be resistant to Imipenem. Antibiotic susceptibilities were determined by agar disk diffusion according to the NCCLS recommended protocol. Detection of metallo-beta-lactamases was performed by the Imipenem-EDTA disk method and confirmed by the MBL E test. Isolates were subjected to PCR assays with specific primers for blaIMP and blaVIM and sequence analysis was performed to identify metallo-beta-lactamase. Epidemiological typing was performed using M13 fingerprints.

Results: Antibiotic susceptibility tests revealed a high percentage of resistance to most of the antibiotics tested: imipenem (96.3%), meropenem (84%), ciprofloxacin (74.1%), piperacillin-tazobactam (34 , 6%), ceftazidime (34.6%), gentamicin (25.9%). %), Amikacin (14.8%) and Tobramycin (7.7%). In the Imipenem-EDTA test, only one strain (Ps10VR) demonstrated a growth inhibitory zone with 16 mm diameter, suggesting the production of metallo-beta-lactamases, while no noticeable change was noted in the other isolates. The MBL E test was performed for this strain and the MIC of imipenem has decreased from 16 to <1 mg / L. In the PCR experiments that used specific primers for blaIMP the results were negative among all strains, while in those that used specific primers for blaVI