What is an ELISA (enzyme-linked immunosorbent assay)?

ELISA (enzyme-linked immunosorbent assay) is a plate assay technique designed to detect and quantify soluble substances such as peptides, proteins, antibodies, and hormones. Other names, such as enzyme immunoassay (EIA), are also used to describe the same technology. In an ELISA, the antigen (target macromolecule) is immobilized on a solid surface (microplate) and then complexed with an antibody that is linked to a reporter enzyme. Detection is achieved by measuring reporter enzyme activity by incubation with the appropriate substrate to produce a measurable product. The most crucial element of an ELISA is a highly specific antibody-antigen interaction.

The enzyme-linked immunosorbent assay (ELISA) is a powerful method for detecting and quantifying a specific protein in a complex mixture. Originally described by Engvall and Perlmann (1971), the method allows the analysis of protein samples immobilized in microplate wells using specific antibodies. ELISAs are typically performed in 96- or 384-well polystyrene plates, which passively bind to antibodies and proteins. It is this binding and immobilization of reagents that makes ELISAs easy to design and perform. Having the ELISA reagents immobilized on the surface of the microplate facilitates the separation of bound from unbound during the assay. This ability to use high affinity antibodies and remove non-specific bound materials makes ELISA a powerful tool for measuring specific analytes within a crude preparation.

Although many ELISA variants have been developed and used in different situations, they all rely on the same basic elements:

Coating / Capture: direct or indirect immobilization of antigens on the surface of polystyrene microplate wells. 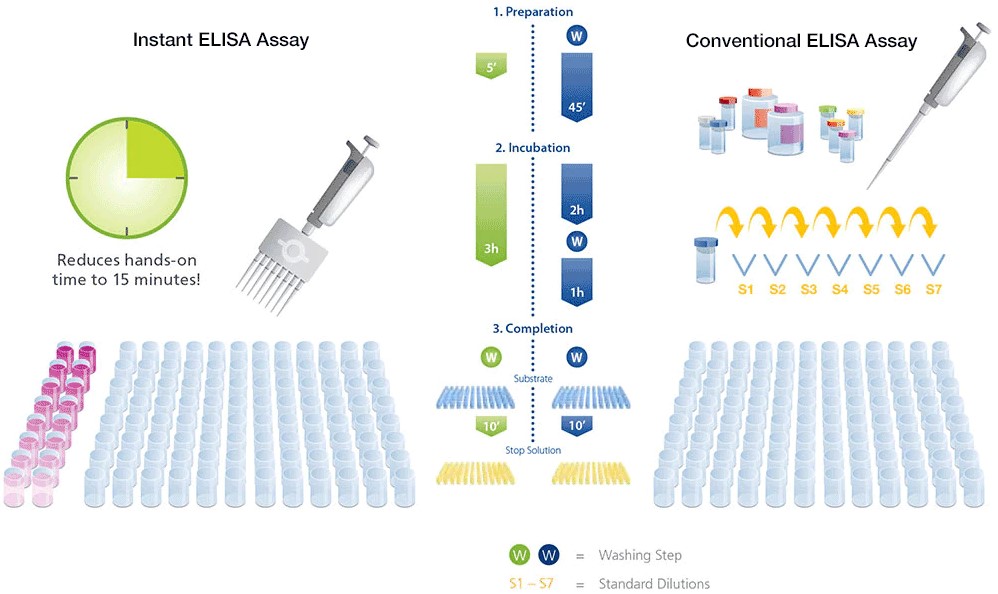 Plate blocking: addition of protein or other irrelevant molecule to cover all unsaturated surface binding sites in microplate wells.

Probing / detection: incubation with antigen-specific antibodies that bind by affinity to antigens.

Signal measurement: detection of the signal generated through the direct or secondary label on the specific antibody.

The most widely used enzyme markers are horseradish peroxidase (HRP) and alkaline phosphatase (AP). Other enzymes have also been used; these include β-galactosidase, acetylcholinesterase, and catalase. A large selection of substrates is commercially available to perform ELISA with a HRP or AP conjugate. The choice of substrate depends on the sensitivity of the assay required and the instrumentation available for signal detection (spectrophotometer, fluorometer or luminometer).

There are several formats that are used for ELISAs. These are classified into direct, indirect or sandwich detection and capture methods. The key step is immobilization of the antigen of interest, which is achieved by adsorption directly to the assay plate or indirectly by a capture antibody that has adhered to the plate. The antigen is then detected directly (labeled primary antibody) or indirectly (as a labeled secondary antibody). The most widely used ELISA assay format is the sandwich ELISA assay, which indirectly immobilizes and detects the presence of the target antigen.

This type of capture assay is called a "sandwich" assay because the analyte to be measured is bound between two primary antibodies, each of which detects a different epitope on the antigen: the capture antibody and the detection antibody. The ELISA sandwich format is widely used due to its sensitivity and specificity.

Among the standard assay formats discussed and illustrated above, where differences in both capture and detection were the concern, it is important to differentiate between the particular strategies that exist specifically for the detection step. Regardless of the method by which an antigen is captured on the plate (by direct adsorption to the surface or by a precoated "capture" antibody, as in a sandwich ELISA), it is the detection step (either as direct or indirect detection ). ) which largely determines the sensitivity of an ELISA.