Access to rapid, inexpensive, sensitive, and instrument-free point-of-care (POC) tests for the diagnosis of tuberculosis (TB) remains a major challenge. Here, we present a simple and low-cost microchip-based TB ELISA (MTBE) platform for the detection of anti-mycobacterial IgG in plasma samples in less than 15 minutes. MTBE employs a non-flow, magnet-activated, bead-based ELISA for the simultaneous detection of IgG responses against multiple mycobacterial antigens. IgG anti-trehalose 6,6'-dimycolate (TDM) responses were the strongest predictor to differentiate active tuberculosis (ATB) from healthy controls (HC) and latent tuberculosis infections (LTBI). TDM-based MTBE demonstrated superior sensitivity compared to sputum microscopy (72% vs. 56%) with 80% and 63% positivity between smear-positive and negative-confirmed ATB samples, respectively. Analysis of receptor operational characteristics indicated good precision in differentiating ATB from HC (AUC = 0.77). Therefore, the TDM-based MTBE can potentially be used as a screening device for the rapid diagnosis of active TB in the POC.

The management and control of tuberculosis (TB) remains a significant threat to public health1, partly due to the absence of rapid, sensitive and cost-effective diagnostic tests2,3. Currently, sputum smear microscopy is the most widely used point-of-care (POC) method for the diagnosis of tuberculosis in endemic countries, despite its low sensitivity (30-60%). gold "provides the required sensitivity, the test takes several weeks and requires well-equipped laboratories and trained personnel 5. Such a long response time often results in late diagnosis, continued transmission, and the risk of developing drug resistance 6. 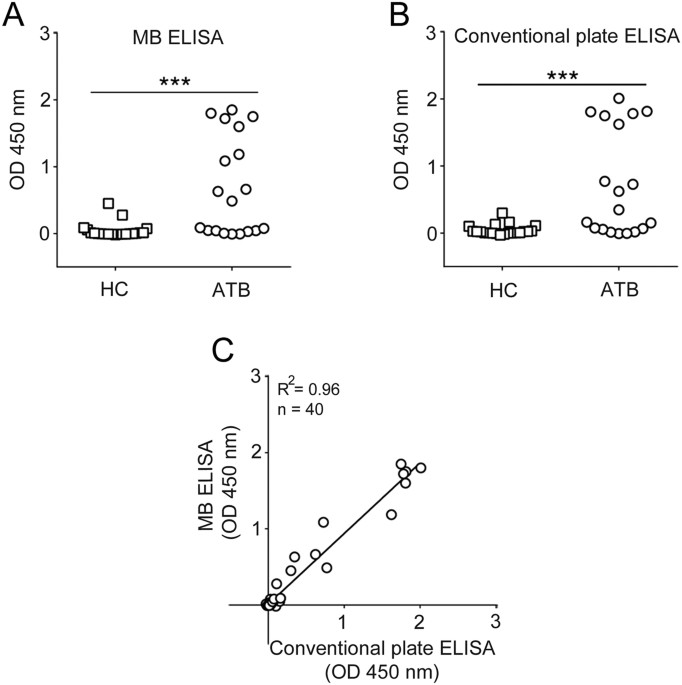 Serological tests based on the detection of antibodies against mycobacterial protein antigens in the form of lateral flow devices or standard ELISAs have been widely used for the diagnosis of TB7. However, these tests have shown poor sensitivity (1–60%) and specificity (53–99%) compared to standard culture methods8, have no better results than sputum smear microscopy, and have failed to improve results. from the patients. As such, the World Health Organization (WHO) has recommended not to use them7. WHO support for nucleic acid amplification-based tuberculosis diagnostic tests, such as the automated GeneXpert MTB / RIF system (Cepheid), the INNO-LiPA Rif TB kit (Innogenetics), and the Genotype MTBDRplus assay (Hain Lifescience ) has helped fill this gap. However, its implementation in POC has been severely restricted by high maintenance costs and the need for sophisticated instrumentation, trained personnel and uninterrupted power supply9. Therefore, there is an urgent need to develop a simple, sensitive and portable assay for the early detection of TB in the POC. An ideal test should meet the minimum specifications outlined by the WHO, such as short test time (

Advances in microscale and nanoscale technologies offer viable approaches for the development of miniaturized POC devices12,13. Microscale technologies enable the integration and automation of multi-step assays, such as ELISA14, allowing sample processing, target capture, and detection in a single integrated device, speeding up the entire assay. In particular, magnetic beads (MB) have been exploited extensively in microfluidic-based ELISAs due to their uniform size, high surface-to-volume ratio, faster reaction kinetics, and ease of handling, providing better sensitivity with a shorter test time compared to conventional methods. flat surfaces 15,16. Furthermore, with the use of an external magnet, MB can be activated / manipulated17,18,19,20 through a series of stationary reagents for biosensing in automated assays21,22,23,24. This provides a simple "sample input and response" based system, which is highly desirable for diagnosis at the POC.